Entertainment• Lifestyle• Out & About

A new year means that the West End will be treated to some new and exciting theatre, from toe-tapping musicals to plays that will have you gripped to the edge of your seat. But with so much to see, Encore Tickets have asked me which ones have made it onto my bucket list for 2019?

Now this one is exciting because the creators of the show are young. It’s not as common to see young writers or creators of shows that actually make it into London’s theatres, particularly musicals. Six The Musical has managed to go from the Edinburgh Fringe to the Arts Theatre and has just announced it’s going over to Chicago! The musical is the untold stories of the six wives of Henry VIII and I’ve heard it’s EPIC.

Book tickets for Six The Musical.

Having had the blessing to see this show on Broadway, I am so happy to see that it’s coming over to the West End. It’s been a while since I’ve seen a show that is effortless in its storyline and the performers who sing and act in this production are phenomenal. I really hope that the casting matches up to that of those on Broadway because the main character Evan has an incredible range of songs. The story is about a boy with social difficulties that suddenly finds himself fabricating a story of friendship between himself and a student at his school who committed suicide.

It’s a poignant story because it’s all about wanting to fit in, wanting to matter and to be a part of something big. I think that’s something we can all relate to right?

Another show that’s come across the pond, I was a little disappointed that they went with an American lead (nothing wrong with Americans btw) but I thought that this show could have probably got away with an unknown performer who was British. With the competition of musical theatre performers, so fierce in London, I was surprised to see that Katharine McPhee had secured the lead. Anyway, it’ll be a great show regardless. The story follows a waitress called Jenna Hunterson who is in an abusive relationship with her husband. Finding out she’s pregnant, she begins an affair with her gynaecologist and seeks a way out of her marriage by entering a pie contest.

I spotted on Twitter the other day, one of the original cast members and founders of Mischief Theatre hinting that there could be another show on the way. If you haven’t already heard of this company, they have brought The Comedy About A Bank Robbery, Peter Pan Goes Wrong and The Play That Goes Wrong to the West End. They’ve also taken it over to Broadway, so it seems there’s no stopping this talented bunch. But what’s the next show I wonder? Whatever it is, I’m sure it’ll have people rolling down the aisles with laughter.

I’m excited to see if any more plays crop up this year that take my fancy. I would highly recommend The Curious Incident Of The Dog In The Night-Time, which has made a return to the West End. If you’re after a belly-laugh musical then you’ll love The Book Of Mormon. I’ve seen it twice now and I still find it hilarious.

Do you enjoy the theatre? What would you like to see in 2019? Let me know in the comments below.

*Disclaimer – This is a collaborative post with Encore Tickets. All words are my own. 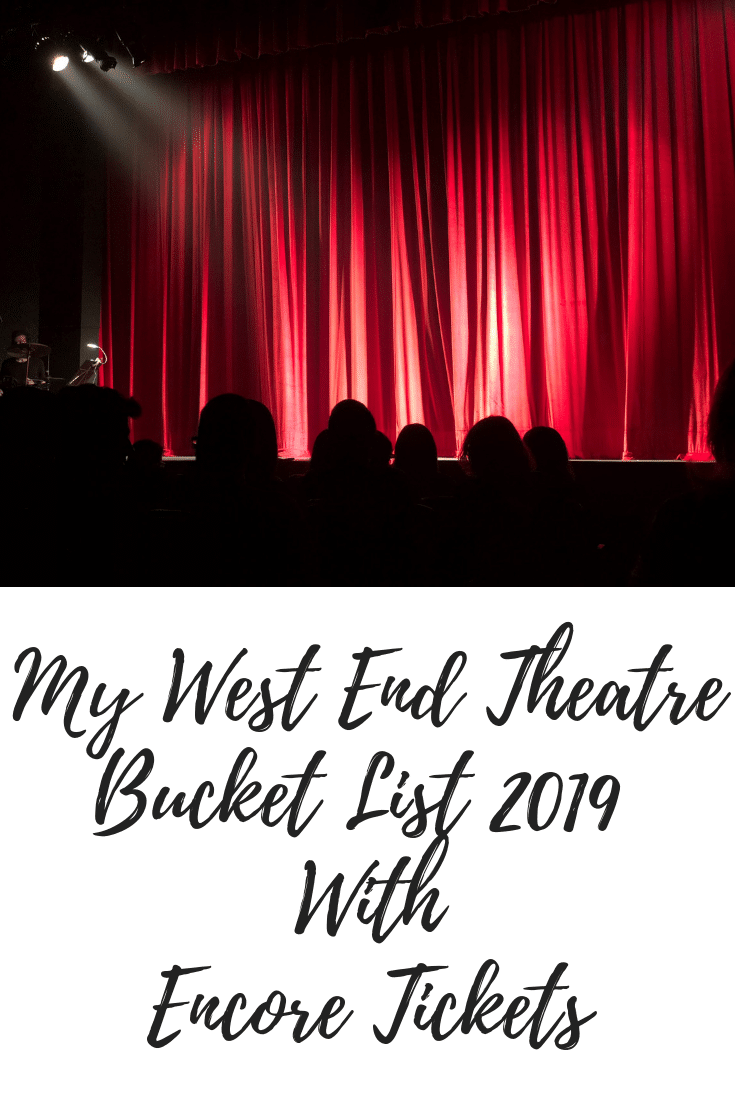 6 Ways To Deal With Negativity

Top Camping Spots In The UK

July 20, 2019
Previous Post Budgeting Your Money For The New Year | with Experian
Next Post My Style Wishlist For 2019 | with Warehouse